A Short History of Club Giraud

A Short History of Club Giraud, the Ursuline Academy, and the Southwest School of Art

To Francois Giraud, conservationist, we owe San Antonio’s first public park, San Pedro Springs. In 1852 he persuaded the city to set aside the plot of land around the Springs, making it the second public park in the United States, the first being in Boston.  His pioneer efforts preceded Olmstead’s plans for Central Park in New York by five years.

He designed other important buildings, supervised restoration of the Alamo and San Fernando Cathedral, became city engineer and ultimately, San Antonio’s mayor.  With the exception of the Ursuline buildings and St. Mary’s University, his work has not survived the ravages of “progress.”

Born in Charleston in 1818 and educated in France, Giraud and his family came to San Antonio in 1847.  In the preceding decade of the Republic, San Antonio had been a war zone.  Continual skirmishes with Indians and Mexicans had left the town virtually destroyed and, with a population of just 800, stagnant.  The missions were in ruins.

To revitalize the Catholic Church in Texas, Bishop Jean-Marie Odin arrived in San Antonio in 1842 and set in motion the French influence on frontier Texas education.  A first step was establishing a school for girls in San Antonio.  Bishop Odin hired the newly arrived French architect, Francois Giraud, to design and supervise the building of the Ursuline Academy and Convent from 1848 to 1849. 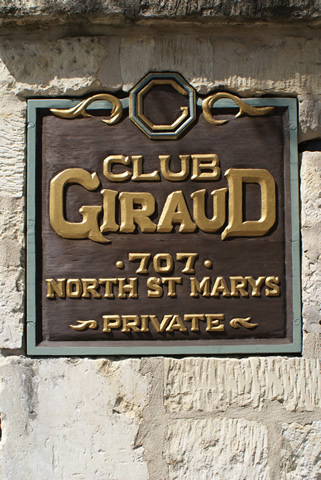 By 1851, when seven French nuns arrived to open the Ursuline Academy and Convent, San Antonio’s population had grown to 3,500. Progress and the receding of the frontier had been accelerated by Texans’ entry in to the Union, and by trade and immigration. At the Academy, classes were taught in French, German, English, and Spanish.

Undeterred by the wolves and wilderness to the north, or the occasional naked Indian streaking through their gardens on the south, the Ursuline nuns persevered and for more than 100 years provided a sanctuary of learning and culture on the banks of the San Antonio River.  But in 1965 the nuns moved north to a new campus, selling the downtown site in parcels to a developer and to the San Antonio Conservation Society.

The Conservation Society bought the Chapel, Priest’s House and First Academy Building and in 1971 invited the Southwest School of Art to relocate its art school there. Four years later, the school purchased the Conservation Society property, and due to the tireless work of its early supporters, eventually came to own the entire original site, including what is now Club Giraud.

The Southwest School of Art began in 1968 as a gallery in the historic La Villita area of downtown “to provide education in handcrafts and the arts.”  Moving to the historic Ursuline site enabled the art school to expand enrollment, eventually offering classes in ceramics, sculpture, painting, jewelry, book arts, photography, printmaking, fiber, digital imaging, glass, and more.  Saturday Morning Discovery, a free children’s program that’s now in its fourth decade, provides a first art adventure for many local families.

Today, the school is considered one of the largest and most comprehensive community art schools in the nation, hosting 250,000 visitors and students each year on campus, at its acclaimed exhibition galleries, and in community programs.  The curriculum is enhanced by frequent workshops and visiting artists of national reputation.  The school added a Bachelors of Fine Arts degree to its community offerings, becoming the only independent college of art in Texas.

The Club Giraud was founded in 1981 with three missions (above and beyond its commitment to fine food and gracious hospitality, of course):   to preserve the historic buildings which it occupies, to provide funds for the preservation of the Ursuline complex (recorded on the National Register for Historic Places and a Texas Landmark) and to help support to a high-quality school for the visual arts.  The rare combination of school, galleries, and club in the Ursuline Academy and Convent setting is indeed a splendid example of “adaptive use of historic structures,“ a goal of present-day conservationists.  Francois Giraud, we believe, would be pleased.